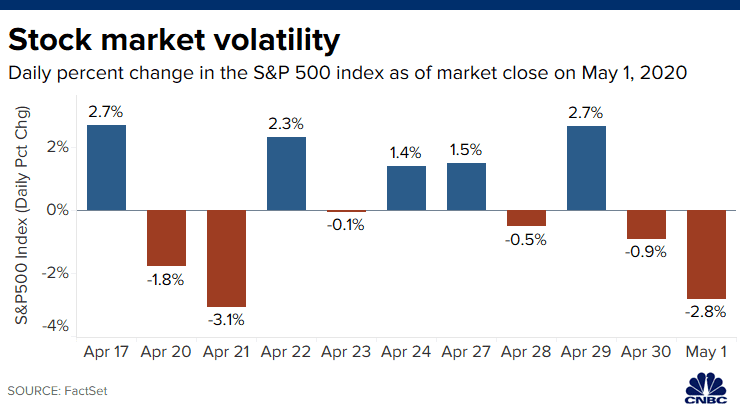 Dow futures were pointing to a drop of about 100 points, less than 1%, at Monday’s open. Similar projected declines for the S&P 500 were coming after the index’s 12.1% advance last week, its best week since 1974. The Dow Jones Industrial Average surged nearly 12.7% in its best weekly performance since last month when a 12.8% weekly gain was the highest since 1938. As of Thursday’s stronger close, the Dow and S&P 500 were less than 20% off their February record highs. The stock market was closed for Good Friday.

Depressed oil prices got an initial bounce Monday, before moving toward the flat line, a day after OPEC and its oil allies finalized a deal to cut production by 9.7 million barrels per day, the single largest output cut in history. Oil prices are more than 60% off their 52-week highs of a year ago, suffering from a collapse in demand due to the pandemic and the price war between Saudi Arabia and Russia. President Donald Trump, who has been heavily involved in brokering a deal between the two oil giants, said in a tweet that it’s a “great deal for all.”

Even as increases in new daily cases continued to slow in America, the United States surpassed Italy on Saturday to become the nation with the most coronavirus deaths. Cumulative U.S. cases rose to over 557,500 with 22,109 deaths.

White House health advisor Dr. Anthony Fauci expressed “cautious optimism” Sunday about the slowing of the outbreak in the U.S., and suggested parts of the country may start to reopen as soon as May. When pressed in Sunday’s interview on CNN, he said more U.S. lives could have been saved had stricter measures been taken earlier. By Sunday evening, Trump retweeted a post that called for firing Fauci, the nation’s top infectious disease expert.

Global coronavirus cases neared 1.9 million, according to Johns Hopkins University data on Monday. Deaths worldwide reached 114,979. While the U.S. has the most cases and more than the next three nations — Spain, Italy and France — combined.

In Spain, which reported 3,477 new cases and a daily rise of 517 deaths, construction and factory workers returned to work Monday as the government lifted some of the most stringent lockdown measures. However, schools, bars, restaurants and other services continue to be closed and Spaniards were still being told to stay at home.

Amazon is putting new grocery delivery customers on a wait list and curtailing shopping hours at some Whole Foods stores to prioritize orders from existing customers buying food online during the coronavirus outbreak. In recent weeks, Amazon increased the number of Whole Foods offering grocery pickup ​to more than 150 locations, up from 80 previously. The moves illustrate how the world’s largest online retailer, which showed its ambition to enter the grocery industry by acquiring Whole Foods for $13.7 billion in August 2017, is now leveraging its presence both online and in physical stores to handle high demand from consumers who are stuck eating at home.

— Follow all the developments on Wall Street in real-time with CNBC’s live markets blog.

— Reuters contributed to this report.